This walk, on the southern perimeter of the island’s Akamas peninsula, offers something a little different: a combination of impressive gorge walking, including rock scrambling and hill climbing, followed by a ramble through beautiful unspoiled countryside, a chance to swim at the beautiful Lara Bay and finally returning alongside clear blue seas. You will have an opportunity to see some great views like this…

…but there is a trade-off. You should bear the following points carefully in mind if you’re going to give this one a go:

If all of this sounds rather off-putting, most of it’s really just common sense. This walk is varied, beautiful in a number of ways and offers some great views of differing aspects of the island. We highly recommend it!

To start the walk you will need to drive out on the F706 to Agios Georgios, on the coast to the north-west of Paphos. As the road heads towards the ancient church by the sea you will pass (on your right) the Sunset Restaurant and, immediately beyond it, a right-hand turn signed to ‘The Akamas’. Turn down this road, following it past banana plantations and down to the coast where the asphalt eventually runs out. Continue on a motorable dirt track for a further 0.7km, reaching a small car park and sign pointing right towards the Avakas Gorge.

You can choose to park here or, if you prefer, turn right towards the gorge and drive further up the hill. The track here is just about motorable for an ordinary car and, past the signposted Viklara Tavern, there’s another car park. As this is a circular walk it’s really a question of whether you prefer the inevitable uphill slog at the start or the finish!

For the purposes of this walk we have assumed a start from the signboard in the first car park at the bottom of the hill. Begin, therefore, by walking up the hill on the track in front of you in the direction indicated by the Avakas Gorge sign. After 5 minutes you will come to a large clearing and, on your right, a sign indicating the gorge. Turn downhill here, heading along part of the European E4 Long Distance Path. 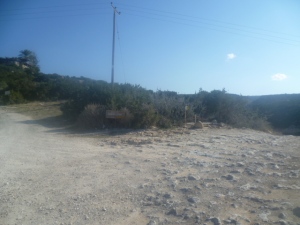 The way into the gorge is closely signed and easy to follow. This early part of the walk is a popular spot with day trippers and the ubiquitous Jeep Safaris. You will pass a further car park and a number of signs to the Avakas Nature Trail as you head back down and into the mouth of the gorge.

After 25 minutes you will turn a left-hand corner and arrive at a series of shallow stone steps which effectively take you into the gorge proper.

Straight away you are entering into the base of a deep ravine where pools have formed and water flows. You’ll need to clamber across boulders and stone-hop across streams. The stone walls of the gorge close in until they are barely a few metres apart and the only available light streams downwards from the sunlit sky above.

This is truly spectacular scenery so make sure you have a camera with you for a few selfies! The rest of the gorge is also beautiful with towering cliffs but it’s only at this point that you are truly closed in by the walls.

Keep following the path into the gorge. It’s no longer a signed route as, beyond the cavern walls, you will be leaving all but the most intrepid behind. You will need to keep a sharp eye out for pointers of the forward path: occasional cairns set upon rocks, the odd spray-painted red spot on pathside boulders and signs of old footprints in the mud. Much of the path is intuitive and, although there are very few clear landmarks, it will probably help to know that the bed of the gorge can be followed all the way through until it emerges out (and up) the far end of the gorge. You just need to keep the faith!

The walk through the gorge should take just under two hours – from the point at which you climb the stone steps at the start to arriving at the top of the hill at the head of the gorge. It’s difficult to be precise on this as much will depend on your skills in orienting yourself around mud, across water, over boulders and through bushes. You may also get briefly led astray by promising-looking goat paths which flatter to deceive! The basic path lies only in the bed of the ravine – sometimes on the left of the water and other times on the right.

The gorge itself offers much to admire. Towering cliffs with screeching jackdaws, lizards scuttling across the wet rocks and, at moments of deafening quiet, the nearby sound of a bleating goat to make you jump out of your skin. This is a beautiful place – with scenery unlike much else that you will see in Cyprus – and you will almost certainly have it to yourself.

After 1 hour 50 minutes you may pass a large rusted container wreck on your left and at 2 hours 10 minutes there is a white trig sign with the number 48 painted on the top. Towards the head of the gorge the stream bed thins and dries out, the cliff walls open out and you can see an uphill path heading up and out of the gorge to the right – you should arrive here at around 2 hours 20 minutes.

Follow the path up onto the southern edge of the gorge as it winds uphill and comes to a T-junction with a wide grassy track. Turn left onto the track and follow it as it goes straight ahead, then winds to the left around an area of scattered trees and rocks. There isn’t much shade from now on, so you may want to take this opportunity to rest under one of the olive trees and admire the view.

Follow the grassy track as it becomes an earth road and at 2 hours 35 minutes you will reach a fork. Take the left hand fork which heads downhill, crossing the stream bed, and about 10 minutes later reach another junction with some animal shelters and a ruined stone building to your left.

Turn right and walk steadily uphill, passing more old stone animal sheds and walking through a carob orchard until you reach a T-junction at 2 hours 55 minutes.

Turn left onto this slightly bigger earth road and enjoy the panoramic views as it climbs around the northern edge of the gorge.

You will follow this earth road for almost an hour and a half, all the way to the coast as it takes you first through the Pegia forest and then down through cultivated areas nearer the coastline. Stay on the main earth road, ignoring any tracks to the right or left. Your views will stretch along the coast and to the wilds of the Akamas. The road is headed for Lara Bay and you will have this in your sights ahead of you for much of the walk. The coast looks almost unbelievably distant but it’s a pleasant walk with much to admire.

At 4 hours 20 minutes reach a T-junction with the coast road (also an earth road) where you rejoin the E4 and turn right. There are (welcome!) signs to the Lara Bay restaurant. Turn almost immediately left towards the coast and in a further 10 minutes you will reach Lara Bay.

Spend some time enjoying a cold drink at the cliff-top restaurant whilst admiring the views across the beach with the mountains in the background. You may even want to cool down with a dip in the sea here…… 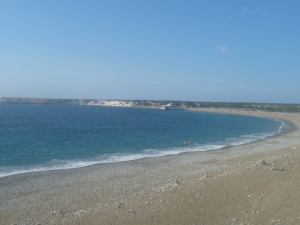 When you are ready to leave, walk behind the restaurant into the earth car park and down the track where there is a road barrier. There were goats and a couple of fat, black pigs in a field to the left when we were here. Just past the barrier a track turns right, off the earth road and into the maquis. Follow this track, wide enough for bikes but not for cars, as it follows the coast – with some beautiful azure blue views – all the way back to your start point at around 5 hours 20 minutes.